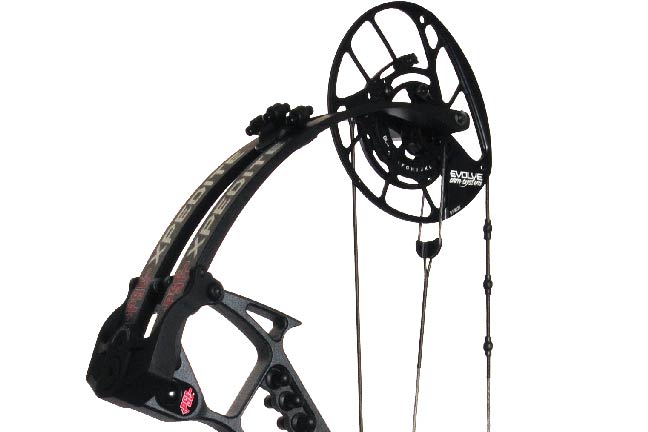 PSE is known for producing some of the fastest bows on the planet. Along with fast rigs, PSE continues to make improvements in other areas, such as reduced system torque and vibration and increased versatility and comfort. All that speed and performance culminates in the 2018 Xpedite, a rig sure to garner plenty of
attention on the range and in the field.

The PSE Xpedite is home to the company’s Evolve Cam System, which offers adjustability in letoff, draw length and even speed. It works with the 982 Series X-Tech limbs and recurve riser to produce consistent performance and speeds between 352 fps and 360 fps, depending on installed module. The unique FRS cable-containment system reduces system torque and cable friction. An adjustable String Stop and Riser Dumbbells work with the past-parallel position of the limbs to tame shot noise and vibration.

Versatile Performance
The Xpedite has a versatile eccentric system in the Evolve Cam. It employs a standard inner cam/module that offers letoffs of 80, 85 or 90 percent and speeds up to 352 fps.Install the Evolve Fast (EF) module, and you gain an additional 8 fps on letoffs of 65, 70 or 75 percent. Both have adjustable draw lengths from 24 1⁄2-30 inches, in half-inch increments, and no bow press is needed to adjust or switch out the inner cams/modules.

An easy-to-read sight window shows the letter that corresponds to the draw length.PSE machines the dual EC cams from aircraft-grade aluminum, and each rides on bushings and stainless steel axles. The cams utilize four individual tracks that house the string or cables at different stages of the draw cycle. Cables are directly linked to one cam and yoked to the other, forcing unified rotation and a wide stance for stability that results in reduced cam lean.

982 Series X-Tech
PSE employs X-Tech limb technology in the Xpedite’s 982 Series split limbs, which are heavily pre-loaded and reach beyond parallel at full draw. This takes advantage of the benefits provided by past-parallel limb configurations in terms of reduced shock, vibration and noise. A set of Shock Mods mounted between the limbs further attacks vibration. Limbs are available in peak draw weights of 60, 65 and 70 pounds.

The interface between the limbs and riser is critical to performance, which PSE takes on with its X-Tech Speed Pocket with Wedgelock. This pocket cradles and controls the last couple inches of limbs, while the wedge secures and forces each limb tip to the front and top edge of the pocket for consistent alignment.

Cut, Caged and Centered
PSE’s Xpedite is built on a reflex, which allows for an increase in the power stroke, which in turn results in better speeds. The forged and machined aluminum riser employs two riser cages designed to increase strength, stiffness and stability through a broader stance from side-to-side and front-to-back. Many cutouts are machined along the length of the riser to keep weight to a minimum. The riser is also designed with True Center Pull Technology, which positions the arrow at the center of the riser to increase performance and tunability.

The Xpedite is outfitted with a unique cable-containment system that connects to the riser with a Flex Rod System (FRS). The FRS uses a fiberglass rod with a belly cut so the system will flex toward the centerline of the bow during the draw cycle, then spring back to its original position and out of the way of passing vanes during the shot. Cables ride on the RollerGlide, which uses large aluminum rollers for the cables and smaller rollers for the rod, all designed to eliminate friction.

Impressions
The Xpedite is a good looking rig with excellent speed and a surprisingly smooth draw. While the grip is functional, it will be cold when the temps drop, and I would rather there were no cutouts in it. There is a notable jump in the handle at the shot; however, some low-level vibration is wiped out with a quality stabilizer. Average noise is reported when the arrow is released, and the top of the bow falls away slowly
after a quick pause. 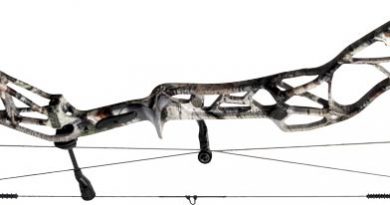 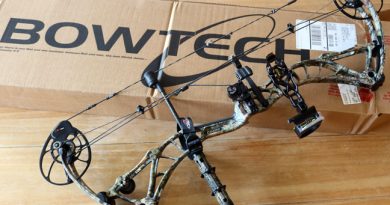 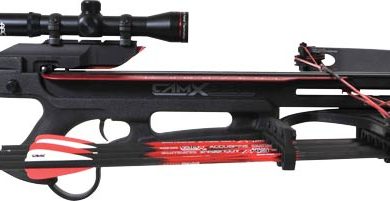