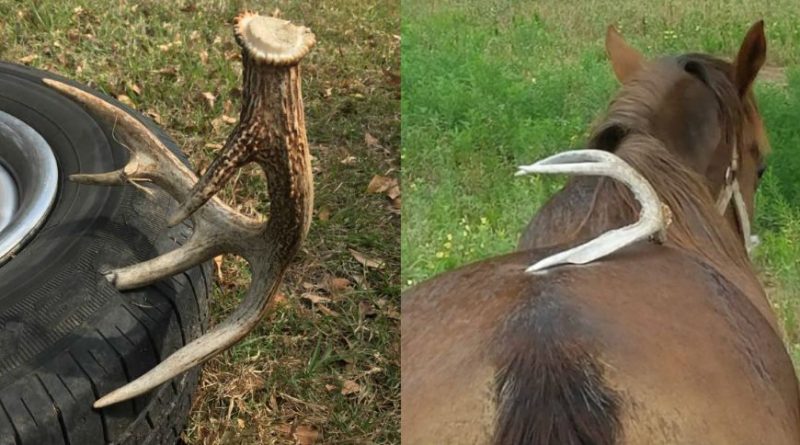 These sheds showed up in unexpected places.

When it comes to shed hunting, the traditional places of looking are usually best. These places include bedding areas, food plots and heavily-used trails.

However, sometimes we come across a shed in an unexpected place. Today we’re going to share some of the more unusual ones we’ve seen on the internet in recent years.

This one happens more often than you might think. The only question is, did they fall perfectly on a branch to get caught in the tree or were they there so long the tree grew up around them? Either way, it’s a pretty cool place to find an antler.

Whether it’s a tractor, truck or ATV, this is the one place no one wants to find an antler because of how expensive the find is. On the bright side, if you know a farmer who has these troubles often, he or she might be a little more willing to let you walk the property if you’re going to be removing these hazards from their fields.

I think everyone can agree, this one doesn’t happen nearly often enough. It’s every shed hunter’s dream to look out at their backyard one day and see a big side just sitting there.

On a golf course

The fairway generally isn’t a place where people think to look for shed antlers. I’ve certainly never seen Tiger Woods or Jordan Spieth pick one up. But if you look on the internet, you’ll find the links is one of the best-kept secret shed hunting locations you can find.

In the jaws of a bear

It isn’t just rodents looking for the nutrients an antler provides. As much as we’d want this nice moose antler, we think we’ll let the bear keep it!

On or next to the road

Deer, elk and moose all cross roads. And, on occasion, an animal drops their crown in the process. The only bad thing about this is you have to be the first lucky hunter to drive by after the antler has been cast or you’re out of luck. I sadly haven’t been quite that lucky yet.

In the back of a horse

Here’s the video of us removing the antler. Again, this horse has been sedated, & a local anesthetic was administered around the entry wound. 2 small skin incisions were made at the 12 o’clock and 6 o’clock to help “loosen”, & allow easier removal. Once removed, the wound was irrigated with a dilute cholorhexidine solution, then plugged with an antibiotic/DMSO impregnated tampon. Hey,it works!!! Enjoy the video. Dr.T Thompson Veterinary Services.

This one is by far the most unusual find on the list. Thompson Veterinary Services down in Texas was tasked with removing the brow tine of a nice shed that pierced the poor animal’s back. It’s speculated the horse was rolling on the ground when this happened.

The horse had to be sedated while the antler was removed, but thankfully it recovered just fine. It does make for a wild story and a most bizarre place to find a shed, though!

The lesson here is shed antlers can be found almost anywhere. You just never know where one is going to pop up, so keep your eyes peeled at all times!

NEXT: 6 TIMES DEER AND ELK WERE CAUGHT SHEDDING ANTLERS ON CAMERA

The article was originally seen at http://www.wideopenspaces.com/8-incredibly-strange-places-people-have-found-shed-antlers/