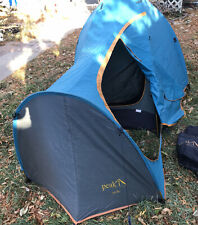 This backpacking review includes these tents: 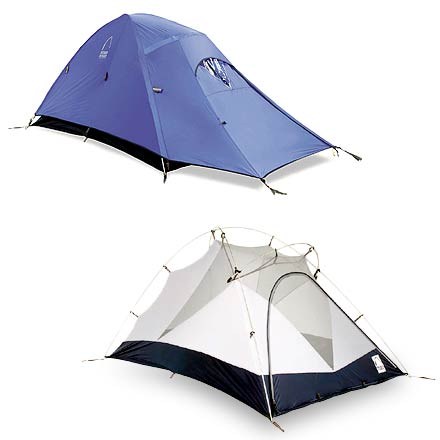 Our testers liked the Orion CD’s ease of setup, good ventilation, and spaciousness. The two-pole design with simple clip attachments makes setting up the Orion a breeze, easiest of the bunch. After a couple of setups, you could probably go from opening the stuff sack to lying down for a quick snooze in just a few minutes.

Orion’s profile is the tallest of the five, leading one tester to question its wind endurance. However, the crossing poles seem to create a sturdy frame with adequate strength

Our testers noticed a common flaw-the rainfly did not completely cover the rear tent corners. On the Orion, this could be easily remedied by lengthening the corner straps by two or three inches and moving the buckle out to the end of the strap. As-built, the buckles sit between the poles and tent corner leaving it exposed to dripping rain off the fly. This arrangement also makes buckling the clip awkward and tightening the strap difficult. On the positive side, the rainfly sits close to the ground evenly around the tent. The Orion is not factory taped, so instruct your customers to seal the seams prior to first use.

A small flap in the rainfly sits just over the vestibule door. This flap offers ventilation during bad weather, producing good top ventilation, without rain exposure. However, when the door is zipped open, rain drips off the flap onto the tent floor, potentially wetting your gear.

Our taller testers notice Orion’s shorter interior length. For anyone 6′ or taller, stretching out means touching the tent wall at one end. Vestibule size was adequate, but a tight fit for two packs.

Summary: A great all-around tent and our overall favorite, with good ventilation, adequate vestibule, excellent ease of setup, and only a couple of minor flaws on the rainfly. A great value. The lack of taped seams is acceptable for this price point-you’ll need to allow time to seal the seams prior to your first trip.

Peak 1’s Apollo is an economical tent with many of the features of higher-priced tents, although those features are not as well designed and constructed as the higher-priced models. For example, Apollo’s vestibule is spacious, yet it is not freestanding-it requires a guy string to keep the vestibule hoop upright-and the vestibule door overlaps the tent body, allowing rain to fall on the tent when you zip open the door.

Good design creates a rollback vestibule, allowing you to use the rainfly without the vestibule.

The end hoop of the vestibule fits so tightly into the rainfly that it is almost impossible to setup. During our initial setup test, we heard the pole start to crack, then eased up. Two of us eventually got it set up without breaking it. Later in the field one of the poles split-fortunately a small roll of duct tape supplied a temporary fix.

Other than the vestibule hoop and weak poles, the Apollo sets up easily. Two crossing continuous pole sleeves frame the tent. Most of the body is mesh, making a tent with excellent ventilation and great night time views. It also limits the Apollo to generally warmer conditions.

The Apollo’s two doors, one at each end, are fabric rather than mesh-not a problem given the tent’s mesh body. The doors attached to the tent body across the top, zipping in a U-shape down, across the floor, and back up to the top, leaving the door fabric hanging from the top of the tent.

All of our testers found this to be inconvenient as the door would hang down in the way. The toggle loops which fasten the door at the top were too tight and difficult to attach. A side-opening D-style door would be a significant improvement. The door zipper doesn’t extend far enough down, leaving a six to eight-inch wide fabric strip at the base of the doorway. We frequently tripped over this strip when entering the tent, and it made working in the vestibule area from inside the tent, such as to cook.

The Apollo has excellent fly coverage, odd since this is the most common weakness of the higher-priced tents in this review.

Summary: Apollo is a fair general purpose backpacking tent. Perhaps the tent’s most significant weakness is the frailty of the poles. The tent’s mesh bodysuits it well for warm-weather camping. 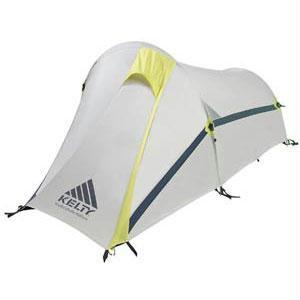 The Windfoil is indeed a very light, but surprisingly capable tent. Its interior space is tight for two people, but great for one person or a couple. The vestibule is very small; boots are about all you can protect from the elements. For one person, you could drag the pack into the tent-for two you’d better have an alternative plan to keep your gear dry.

Setup is easy, although we found it difficult to get the tent and rainfly as taut as we’d like.

The tent features two hoop-style poles with continuous pole sleeves. The poles have a rubber stopper at one end that slides through the sleeve and into a pocket. We appreciated this simple design which reduces the likelihood of the pole damaging the sleeve. Rainfly protection was very good.

Ventilation is adequate, except in very warm weather, with two mesh strips about five inches wide running down the full length of the tent about halfway up the sidewall. Most testers felt the tent would be improved by widening these strips. The existing mesh does not offer good viewing at night.

Summary: A great lightweight backpacking tent for one or two who know each other well. This one was well-liked by everyone who tried it. The best choice for longer trips or smaller backpackers for whom weight is an issue. 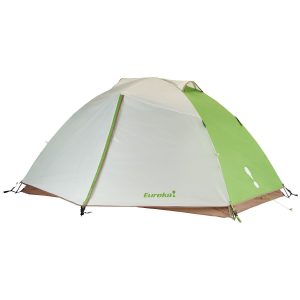 The Assault is heavier than the other models reviewed here. The Assault differs from the other four in that it is suitable for light four-season usage, and has larger interior space.

Dual doors are located along the sides (length) of the tent. Over each door the rainfly forms a vestibule, the “front” being larger and the rear mainly a boot vestibule. The doors are both mesh and fabric contributing to the Assault’s four-season abilities. The front vestibule is acceptable, but seemed small for the overall size of the tent; cooking would be difficult in the limited space. Dual zippers on the front vestibule make it possible to vent the doorway for circulation.

A long mesh panel flows from end to end across the top of the tent body for good condensation release and ventilation. Assault’s three-pole design makes for a sturdier frame; adequate for light to moderate snow load.

Other notable touches on the Assault include a pole pocket in the stuff sack, an optional footprint, taped seams on the wrap-around bathtub floor, and good headroom. Rainfly coverage is good, covering the entire tent body including corners, and sitting close to the ground.

One drawback of the Assault is the lack of sealed seams on the tent body. Eureka includes a tube of seam sealer which is about a two-hour job. We found two types of tent stakes in the bag, but together there were not enough to stake down the tent and rainfly. We recommend buying extra stakes when you buy a tent.

Summary: A good three-plus season tent for those who need a little extra space or planning time out in the snow or colder weather. Sturdy construction, acceptable (but barely) vestibule space, and good ventilation are the Assault’s highlights. 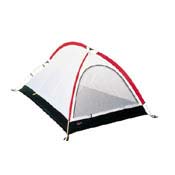 The Rapeed features Walrus’ hub-technology at key pole junctions to create a sturdy tent with a good-sized front vestibule. Small shock-corded poles meet at the hub-junction points at the crest of the tent above the foot and over the front door of this tunnel-style tent. A front-to-back backbone pole connects the two hubs.

The single door is a D-style with both mesh and fabric zipper panels. The fabric panel allows you to close off the mesh door in colder weather. Rapeed’s ventilation stems from the door mesh and a small mesh window at the tent’s foot. Our field staff expressed concern that this relatively small amount of mesh would keep the tent too warm in summer. Certainly, you would need to make sure to align the tent’s length (door to foot) with the wind direction to ensure adequate ventilation.

We also speculated that the lack of mesh at the top of the tent (along the “roof”) would restrict condensation from escaping, although the front-to-back venting would allow airflow through the highest point of the mesh door.

Setup time was slightly longer than average. The hubs and poles come pre-attached to the tent with sturdy laces. Takedown was relatively easy-easier than setup-but getting the poles back into their original positions to roll up the tent seemed overly complex. Also, all of our testers have grown to prefer stuffing tents and rain flies into the sack rather than rolling them up. Stuffing prevents creasing of the tent in the same place every time you stow it; rolling tends to occur in the same way every time. Rapeed’s attached poles eliminate the stuffing option.

Vestibule size and versatility are two of the Rapeed’s strengths. The dual-zippered door allows multiple options: zip one open and pull back the side for cooking during inclement weather; zip both up a few inches for ventilation, or zip both completely for easy access. Our testers did question the choice of hot pink for the vestibule area, but that’s just a style preference.

Rapeed’s weaknesses all relate to the rainfly. First, it sits too high off the ground, especially on the tent’s sides. In fairness, the fly will keep the rain off the tent body, but a strong wind may let too much of it underneath. The fly also did not cover the rear corners well, allowing rain to drip onto the tent body. Since the corners are part of the tent’s bathtub floor, they are probably waterproof. Finally, no stake loop on the middle of the back of the rainfly forces you to use a guy string (provided) to hold the fly taut and away from the tent

Summary: The Rapeed offers a lightweight, strong two-person tent, with a larger than average vestibule, and light four-season capability. The lack of side mesh for ventilation steers us away from the Rapeed for warm summer usage. Ease of setup rates fair, the hub making for added stability but more complexity on setup and takedown.