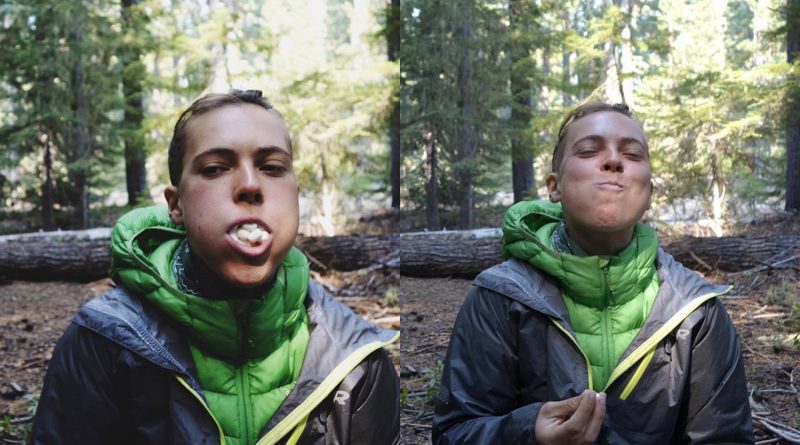 Not all of them tasted bad…

Things slow around the campfire? In the middle of an awkward first date? Here’s a sure-fire way to kickstart some funny conversations. Simply ask, “So, what’s the grossest or weirdest thing you’ve eaten in the backcountry?” Everyone with a few trips under their belt is bound to have a pretty good tale.

Below you’ll find some from REI staffers and members—who apparently seem to shove anything remotely edible straight into their pie hole. Read on, then tell us your funny food story in the comments below.

Some PCT thru-hiker friends were fishing with their hands out of a stream just past Muir Hut in the Sierra, and I ate a handful of the little eggs right out of a trout when they cut it open. I was so hungry. —Kacie Ross, member

On the last day of a five-night stint in Washington state’s Enchantments wilderness, we mixed up a pouch of chili mac with a pouch of instant eggs and bacon—all the extra freeze-dried food we had in our packs that we did not want to carry out—and “made” our buddy eat it. It didn’t rehydrate well and neither did he. —Cameron Preston, video producer

Mint-chocolate-flavored GU gel that turned out to be four years past its expiration date. Didn’t think to check the expiration date until I detected some hard chunky bits in it, but by then, it was already halfway down the hatch. —Yitka Winn, editor of product content

After watching the TV show Alone and seeing the contestant who eventually won eat a banana slug, the next time I went hiking I cooked one and ate it. It did not taste like escargot; it wasn’t terrible, though. Don’t know if I will ever choose to eat one again. —Nate Curtis, systems engineer

5. The Leave No Trace fanatic:

Pouring pickle juice into the dregs of a mayonnaise container and drinking it (it’s the only way to LNT clean a mayo container). —Marlee Henninge, member

6. The world’s most stale candy bar:

A 3 Musketeers that was so old the filling shattered when I tried to bite into it. But at that point, I was halfway up Wyoming’s Togwotee Pass and was damned if I was going to stop. It was kind of like eating old bread covered in old chocolate. It was pretty bad. —Bob Caddy, member

I ate a Snickers bar that had fallen on the floor of a public restroom on the Nevada/California border—we’d been biking through the desert all day and I just really wanted that Snickers bar! Lived to tell the tale. —Allison Kornstein

Our stove gave out midway through meal prep. We ate cold palak paneer over half-cooked instant rice for dinner. But things really took a turn for the worse when we made hot cocoa in cold water (pro tip: it clumps) and tried to salvage it by adding mouth-scorching habanero tequila. —Eric Hess, senior program manager of SEO content

I found a few slugs under a log during a cross-country bike trip. I washed the dirt (and slime) off one which seemed to shock it, and I felt bad thinking it was going to die. Eating it seemed best at that point. —Mick McMick, member

Made some mashed potatoes on the camp stove. Fellow camper knocked over the pot and thought the best way to correct the situation was scooping the dirt-encrusted potatoes back into the pot. Dirt potatoes are best swallowed whole and chased with plenty of water. —Michael Beavers, member

On a canoe and camping trip in the Boundary Waters Canoe Area Wilderness, the guys put all the ramen flavor packets in one giant bowl (chili lime shrimp, chicken, pork, beef, mushroom) with too little water to dissolve it. Not-quite-cooked noodles with so many granules of a terrible flavor melee… We ate most of it because we had to. Our other options were to dig a deep hole to bury it or carry it out with us.  —Erin Potter, member

On a cross-country cycling trip, I had instant coffee and Gatorade mixed—you know, for fuel. It was really way worse than we thought it’d be. Especially since the coffee doesn’t dissolve in lukewarm Gatorade. —Nyx Robey, member

I’ve eaten lichen because it’s edible, and I wanted to see if I could pack less and just eat that (no surprise: real food is way better). I once ate a chicken heart because I was into wilderness survival at one point and had killed a chicken to share with a few people. My all-time favorite, though, was a gummy energy chew of some kind I found on the ground near the summit of the Grand Teton. I was running low, and I found it at just the perfect time. It tasted great, but one of the people I was with was really grossed out for some reason.  —Shannon Davis, editorial director of REI Adventure Projects

In about 1998, I ate an MRE that had expired in 1984. The crumbly cracker things were awful, the peanut butter was still good and there was a pack of M&Ms with the tan ones in it! Which we ate. (Still good!) —Cameron Preston, video producer

Do you have a story? Share it in the comments below. We want to be completely queasy.