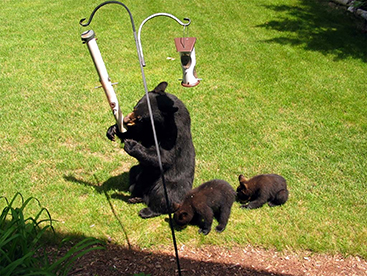 “The ideal situation is for a bear to walk past your property, not find a food reward and move along on its own,” said DNR wildlife communication coordinator Katie Keen. “That’s the best way to live with bears and not encourage conflict.”

Black bears can be found throughout more than half the state. Bears find birdseed and suet especially attractive, as they are high-calorie and reliable compared to other plentiful and natural food sources. Bird feeders can draw bears past their natural habitat, where they would normally be enjoying roots of early spring plants and insects in trees and logs. Bears also typically will continue to return to a location once they have found a food reward there.

“The majority of calls we receive about bears involve a bird feeder. Taking the feeders down before they are found by a bear can eliminate future problems,” said Keen. “A bear doesn’t just forget an easy meal, and wild animals can pick up habits.”

While it is legal to feed birds, property owners may be creating an irreversible safety issue by providing food for bears.

“Bears that receive a food reward when around homes, yards and neighborhoods typically lose their natural fear of humans and can become a potential threat to people and their pets,” Keen said.

The simplest thing people can do to avoid problems with bears is remove bird feeders during the spring and summer months. With an estimated 2,000-plus adult bears in the northern Lower Peninsula and almost 10,000 in the Upper Peninsula, there are plenty of bears searching for natural food that is plentiful in forests, fields and wetlands. Garbage cans, dumpsters, barbeque grills, restaurant grease bins and bee hives also can attract bears to areas people frequent.

Learn more about Michigan’s black bears and how to prevent potential problems by visiting michigan.gov/bear or by watching “The Bear Essentials” video below.

The article was originally seen at http://www.outdoornews.com/2018/03/16/dnr-take-action-now-reduce-bear-problems-video/