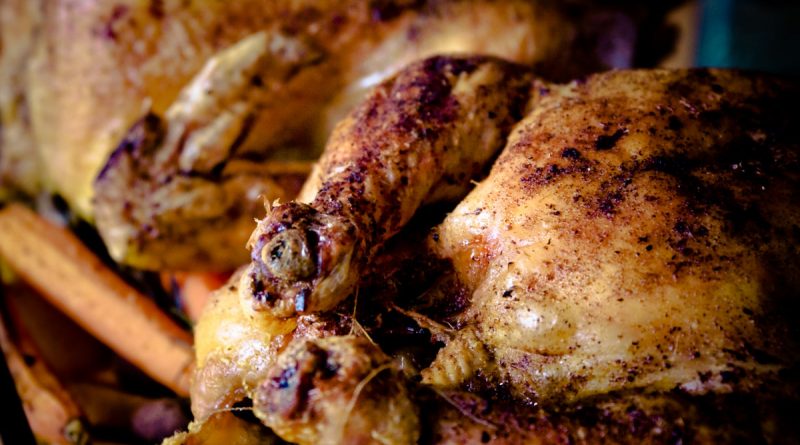 Getting outdoors to give thanks doesn’t have to mean dehydrated meals.

For millennia before we invented the crock pot, we humans have had another way to slow cook food: bury it. With a shovel, plenty of hot coals and some patience you can turn any piece of small real estate into an oven. Sure, roasting a turkey or other bird in a pit it takes longer than throwing some turkey cutlets into a skillet, but let’s be honest: half the fun of Thanksgiving is shooting the breeze in the kitchen before dinner, and slow-roasting your birds underground doubles your family downtime and gives your meal a tender, juicy main course.

A 3×3 ft. patch of land (check regulations before digging)

1 potato (or root vegetable of choice) per person

A roll of foil

STEP 1
Dig a two-foot-deep hole about twice as large as the food you plan on cooking. Line the bottom with dry rocks (don’t use river stones, which can explode) and build a large fire inside. You may want to start a second fire next to the pit to generate more coals (you’ll need a four-inch layer of lining the bottom plus more to cover the food. Producing coals can take up to an hour, so plan accordingly.

STEP 2
When you’ve got a good blaze, prepare your food for burial. If using a dry rub, coat the birds before wrapping them in a double layer of aluminum foil. (Using a marinade? Apply to the meat the day before.) Pack any root vegetables in separate packets. Seal well to keep the dirt out.

Bonus: Wrap your food in banana leaves (find them in the frozen section of Asian or Latin American markets) before wrapping with foil to add an extra layer of protection and subtle flavor. Roll up thawed leaves to store them in your pack.

STEP 3
When the coals are ready, shovel a four-inch layer into the bottom of the pit, reserving enough for a one- to two-inch layer on top. Place the food in middle of the pit, leaving a few inches between packets, and shovel the remaining hot coals on top of the packets. Shovel about 6 inches of dirt over the top layer, then crack open a beer and settle in. Even buried, the pit will be hot, so keep an eye on it if you have any wandering kids or animals.

STEP 4
Pit cooking is hardly an exact science, so cooking times will vary depending on the weight of the bird. A cornish game hen takes at least 1 to 2 hours. A chicken could take twice as long, and a turkey five hours or longer. Until you’ve gotten the hang of pit cooking, it’s OK to dig up some food to check its progress after an hour. Any vegetables will be thoroughly cooked by time the meat is done.

STEP 5
When your poultry’s internal temperature clocks in at 165°F, dig up and dig in. (Drench hot coals in water and fill in any holes.)

Combine all ingredients in a food processor and blend until smooth. Marinate chicken overnight or for at least two hours before cooking.

The article was originally seen at https://www.backpacker.com/skills/how-to-roast-a-bird-on-the-trail