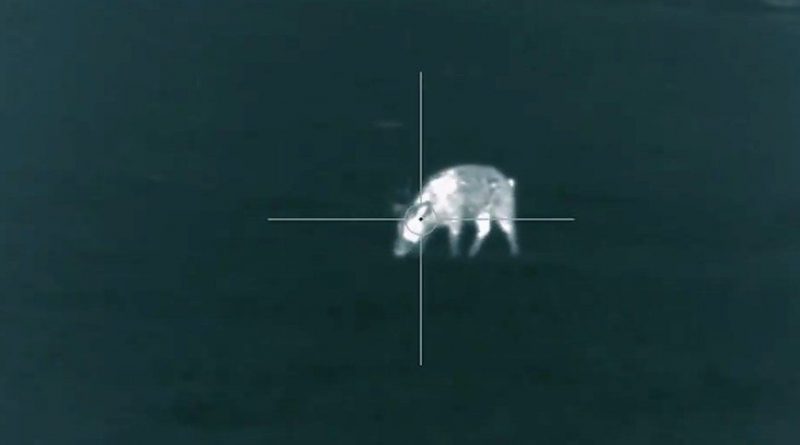 Watch as Jeff Thomason of Predator Pursuit uses it to effectively hunt hogs in Oklahoma.

Thermal imagery scopes have changed the hog and predator hunting game, and Pulsar is one of the key components in that. With the innovation taking the industry by storm, the technology continues to advance, but price points are becoming more favorable for the everyday consumer.

With that, you’re seeing many hog and predator hunters taking advantage of the great thermal scopes available to them. Pulsar has quickly come to the forefront and this video is a prime example of why.

Watch as Jeff Thomason from Predator Pursuit uses the Pulsar Trail XP50 and the Pulsar Helion handheld unit to eradicate some hogs from the Rafter F. Ranch in Oklahoma. With some of the best thermal footage you can find, this teaser clip shows you the capabilities of these Pulsar products and the quality you get with the Trail and Helion.

At certain points in the video, you can literally see the hair on the hogs.

So, what are some of the specifics that separate the Trail XP50 from its competitors?

The Trail XP boasts an uncooled micro-bolometric matrix 640x480px, at 17 µm, for highly detailed imaging. A heat sink, located on the device’s body, effectively prevents heat buildup from the sensor and other components. While doing this, it also significantly reduces temperature and noise sensitivity, especially between calibrations, creating the best image definition on the market.

Trail models include variable magnification up to 8x depending on the model, and feature both 2x step-up and smooth, graduated magnification for a truly optimum, customized field of view. The XP50 is the most advanced model, which can detect big-game heat signatures up to 1800 meters away.

It has quick-changing battery packs for on-the-move field use, and the whole unit is also completely waterproof.

Hunters love it because it features one of the most user-friendly interfaces on the market. There’s also a built-in video recorder that you can use to take still images or videos of your hunt.

The footage from Predator Pursuit speaks for itself. Rather than continuing to carry on with more details, if you’re interested, be sure to check out the Pulsar products at Night Hunting Depot. You won’t be disappointed.

NEXT: THIS COYOTE NEVER STOOD A CHANCE

The article was originally seen at http://www.wideopenspaces.com/pulsar-trail-xp50s-hog-hunting-footage-and-capabilites-are-insane/