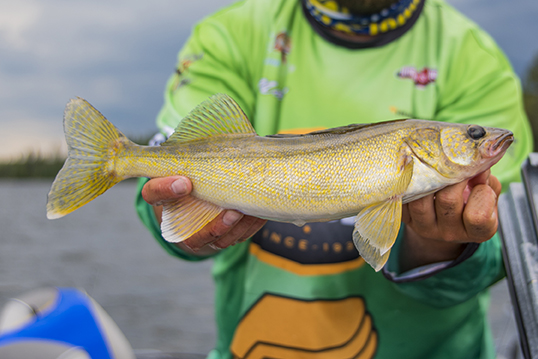 Northwestern Ontario is a gem made up of rugged shorelines, pristine waters and hospitality you just can’t find anywhere else. Fishing in this region is unlike any other, there’s a reason folks return year after year, some introducing two or three generations of their family in the process.

Here’s a roundup of some of our favorite species and tips on how to target them. Fly anglers- there’s some information in here for you as well.

Let’s begin with walleye. Lovingly known as Walter’s, Waldo’s and to some Canadians, yellow pickerel. These gold-plated fish are on almost every angler’s list. Trophies are not hard to come by and it’s no secret they are some of the tastiest of species out there.

Tried and True: These fish will eat everything from a jig and minnow to a crankbait made for pike. Try the Rapala Rippin Rap while trolling or casting early in the spring.

Common Fly: A white zonker or woolly bugger will do the trick with sinking line and a 9-foot leader. 8 or 9wt rod.

Their larger cousins may get the limelight as more sought after fish, but pike have every bit of fight with that much more willingness to eat. The Ontario record was caught in our region, and many more are caught each year that inch closer and closer to beating the current record of 48”. Simply said, pike in northwestern Ontario are big.

Tried and True: They’ll eat spinners, soft plastics, full size muskie lures, even bass poppers or worms on a single hook. If we could narrow the selection down, we’d suggest a jointed crankbait in perch or pike- yes pike, colors.

Truly the beasts from the depths, lake trout are the original lunkers of northwestern Ontario. Reports have shown lake trout to have lived up to 70 years, making them the oldest fish in our waters second to sturgeon. They also happen to be a lot of fun to target. Tireless fighters, you’ll think you have them to the boat or ice hole before they tear away more line again and again.

Common Flies: There’s nothing common about fly fishing for lake trout, but it is possible. I personally suggest fishing for them at ice-out where permitted. They can sometimes be found in no more than three feet of water. Large bunny strip meat flies and even small mayfly patterns will set them off.

The fish that have captured angler’s hearts all over the globe. Ontario’s brook trout fishery is second to no other. World renowned, and even the world record holders. Brook trout are gorgeous, spunky and sought after by almost all.

Tried and true: Spoons, particularly smaller E.G.B’s are the go-to for these fish, smaller (but not too small) swimbaits and tube jigs will also get the job done.

Common Flies: Woolly bugger strikes again. Yup, this fly is bound to catch just about everything. You can also use Mike Fuller’s Northern Redbelly Dace for the aggressive eaters. They aren’t just found in rivers here, target them in lakes for a new experience.

Famous for all the right reasons. Smallmouth bass offer anglers of all skill level the thrill of a lifetime with their white knuckle leaps from the water and glorious fight. Though we have largemouth bass in northwestern Ontario, it’s our smallmouth that steal the spotlight.

Tried and True: Any perch coloured jointed crankbait will do the trick. Watch for follows, they behave more like muskies than people give them credit for. If I had a fish for every time I’ve pulled my bait out of the water right at the boat with a monster behind it, I’d have a new personal best by now.

Common Flies: Smallmouth bass absolutely adore olive woolly buggers, add rubber legs and you are good to go. The uglier the fly, the better. I use a 9wt to battle with the football sized smallies we have up north.

What can I say about muskie that hasn’t already been said? Fish of 10,000 casts, water wolves, ghosts, you name it. These notorious fish have been well protected for decades in Ontario’s waters, as such their numbers are healthy. Northwestern Ontario consistently supplies muskie anglers the memory of a lifetime and continues to do so.

Tried and True: When I gear fish for muskie I almost always throw one of two things on; a soft plastic Water Wolf Lure or a Top Raider. Because who doesn’t want to see a muskie hit a topwater?

Common Flies: Large streamers anywhere from 3-12 inches long, it’s common practice to make them articulated. Some swear by rattles, others despise them. Just keep it in mind that bucktail and marabou materials will be your best friend.

Perch can be found in just about every region of Ontario, but crappie are an abundant gem to find in northwestern Ontario. They have thrived in our clear, oxygenated waters with plenty of healthy weeds and structure.

Tried and True: Small jig heads and soft plastics are a sure bet with crappie or perch.

Common Flies: If you’d like a go-to, try a Crappie Kandy fly in size 6 or 8 hook. These flies are similar to woolly buggers, simple but flashier.

A great deal of fishing can be done in northwestern Ontario’s waters, more than anyone can do in an entire lifetime. It may be overwhelming when you look at the sheer size of this region, but there are ways to narrow your search down. For instance, Ontario’s Sunset Country’s Travel Guide and Map are an excellent source of information and will help you search by species of fish, town, and even drive-in, boat-in or fly-in lodges.

The post A Mecca for the Multi-Species Angler: Alyssa Lloyd appeared first on Outdoornews.

The article was originally seen at http://www.outdoornews.com/2018/03/13/mecca-multi-species-angler-alyssa-lloyd/