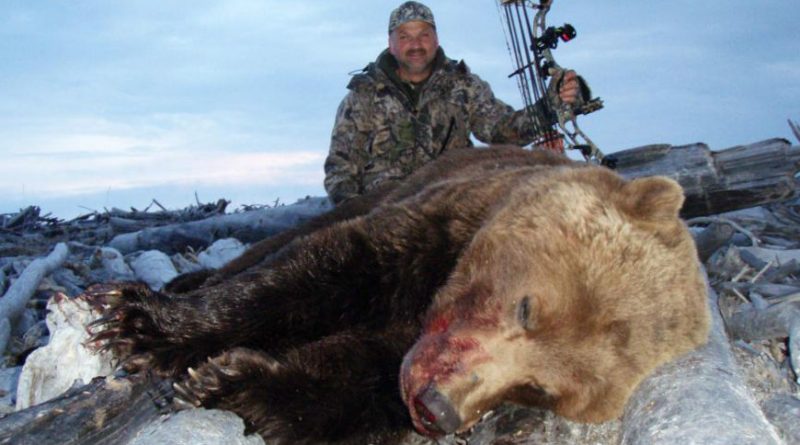 The world record grizzly bear came so close that archer Rodney Debias could smell the bear and hear him breathing.

Rodney Debias of Windber, Pennsylvania took an Alaskan grizzly bear in 2009 that was officially recognized as the new Pope & Young world record in 2016.

Although an experienced and successful bowhunter, Debias’ dream of taking a grizzly bear with his bow eluded him for many years. Circumstances, however, were in his favor when in 2009 he was able to fly to Unalakleet, Alaska, to pursue his dream.

Although Debias and his guide, Don Stiles, saw the big bear two or three days into the hunt, it took eight full days of hard hunting, in nasty, icy conditions before Debias had his opportunity at the monster.

Of that first glimpse of the record bruin, Debias recounted in a 2011 story for Bowhunter magazine, “Don spotted a beautiful blonde bear 600 yards away, and I noticed another bear 100 yards below Blondie. Don guessed the blond at 7½ feet, the other at 7 feet. As we watched them, a huge chocolate bear ran between the two. He looked like a Mack Truck passing between two Honda Civics!” But after three more days without seeing any bear or even a track, Debias and Stiles were ready to give up on their plan. That’s the moment when “The Big Guy” appeared.

The grizzly had suddenly appeared at just 17 yards away. The two men were exposed, with no cover, but had the wind in their faces as the bear kept moving in their direction.

Debias recalled that at 10 yards, “Suddenly he stopped, nose in the air, nostrils flared. I could hear him draw a deep breath. He exhaled. I could smell him. He drew another breath, this time curling his lips outward. I was amazed at his size. He exhaled again. He knew something was up…He took two steps, stood straight up, and looked down on us.”

Amazingly the bear did not detect the two men. Debias had his bow resting on his knee but dared not lift it to draw.

The big bruin moved past the hunters as Debias waited for the bear to look the other way. At 29 yards he had his shot and sent an arrow through the bear’s chest. At 60 yards, the grizzly dropped. After some time, confusion, and rule changes, Pope & Young scored the bear at 27 1/16 and crowned it the new World Record. Debias’ grizzly is also the largest grizzly bear taken by a hunter with any weapon. The bear beat the previous World Record grizzly score of 26 3/16 by almost a full inch. That bear was killed in 2004 by Dennis Dunn and was also taken in Unalakleet, Alaska.

One of my favorite parts of Debias’ story is his endcap, where he gives special mention to the people he met and hunted with in Unalakleet, Alaska. It speaks to one of the reasons why hunters do what they do, and to the brotherhood or sisterhood of the larger hunting community.

“As big as the bear was,” he says, “just as important to me was the time I’d spent with Don, Virgil and Eric Umphenour, William ‘Middy’ Johnson (whose grandfather was one of the original Mushers on the serum run to Nome, now known as the Iditarod), and especially the people of Unalakleet.”

“When life has you down and you think there’s no good in the world, buy a plane ticket to Unalakleet and walk down the dirt street lined with humble houses. Strangers will invite you into their homes to enjoy their best fish and to share stories of their culture. In return, they expect only that you share stories of your own. The people of Unalakleet are the most wonderful, giving people I’ve ever met. Yes, I arrived wondering how anyone could live there. Now I wonder how anyone could leave.”

NEXT: ALASKAN BOY HARASSED BY LOONY ANIMAL RIGHTS ACTIVISTS FOR KILLING A WHALE TO FEED HIS VILLAGE

The post A Look Back at the World-Record Grizzly Bear, All 27 1/16 Inches of Him appeared first on Wide Open Spaces.

The article was originally seen at http://www.wideopenspaces.com/new-world-record-grizzly-bear-biggest-ever-taken-bow-gun-pics/